9 Things I Hate About The Barbershop

Why I Hate Sports Fans 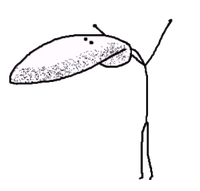 Under is the deuteragonist and one of the two, channel's traditional characters. In his videos, he usually acts as the audience of the situation of the video. His name originates from the fact that Grade was an 'UnderA(chiever)' prior to YouTube.

He is a much taller stickman compared to Grade and his head is just Grade's flipped upside down (and added facial hair, moved eyes).

Usually in Grade's videos, The Under character (and the Grade character too) is edited to look like other characters. Sometimes, the edited character is used more than once.

Rarely
Retrieved from "https://gradeaundera.fandom.com/wiki/Under?oldid=1229"
Community content is available under CC-BY-SA unless otherwise noted.